A London Court recently dismissed an appeal by Jaguar Land Rover Limited (JLR) relating to trade mark rights for the shape of its Defender SUV.

JLR subsequently submitted evidence that the marks had acquired a distinctive character in relation to the goods through long use in trade.

The Land Rover Series 1 was launched at the Amsterdam Motor Show back in 1948. Mass production of the Defender models ceased in January 2016, replaced by a very different and much more luxurious model.

Ineos Industries Holdings Limited (Ineos), unveiled the Grenadier, a rugged four-wheel drive off-road vehicle in July 2020 – the Grenadier is similar in appearance to the old Land Rover Defender. It has been purported that British billionaire and Ineos Group’s CEO Jim Ratcliffe tried to buy the rights to keep building the Defender in the UK but was unsuccessful in this plight.

Ineos opposed JLR’s trade mark applications on multiple grounds in relation to the Trade Marks Act 1994, including lack of inherent distinctive character as well as bad faith. The Opponent also noted that the shapes “result from the nature of the goods themselves and/or are necessary to achieve a technical result and/or give substantial value to the goods”.  For a shape mark to be accepted, it must not unfairly limit other traders in their use of the shape.  It must be a non-functional aspect which adds to overall brand identity. Ineos argued that JLR’s shape marks were not distinctive enough to be a brand identifier.

The United Kingdom Intellectual Property Office found the shapes that JLR sought to get protected weren’t distinctive enough and refused the applications. 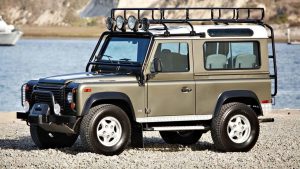 JLR appealed the decision and earlier this month, the United Kingdom’s High Court upheld the findings by the UK IP Office that while differences in design may appear significant to some vehicle specialists and enthusiasts, they “may be unimportant, or may not even register, with average consumers.”

The Defender’s shape has been trade-marked in a number of countries. The decision clears the way for Ineos to market the Grenadier in the UK. Ineos said in a statement. “We continue with our launch plans and are excited to bring the Grenadier to market in 2021.”

Since trade mark rights differ from country to country, it will be interesting to see how Ineos will approach trade mark protection in other markets as they seek to broaden their distribution of the Grenadier.

What This Means For You

Shape marks can be an extremely effective aspect of a business’s overall branding, however they can be difficult to protect and brand owners in Australia usually need lots of evidence to support their application to have trade mark rights granted. If you are seeking protection of a distinctive shape, contact our trade marks team to discuss your options.

For advice relating to your specific situation, please feel free to contact Geraldine geraldine@mbip.com.au or Kellie kellie@mbip.com.au directly. We look forward to helping you secure a strong, enforceable trade mark.